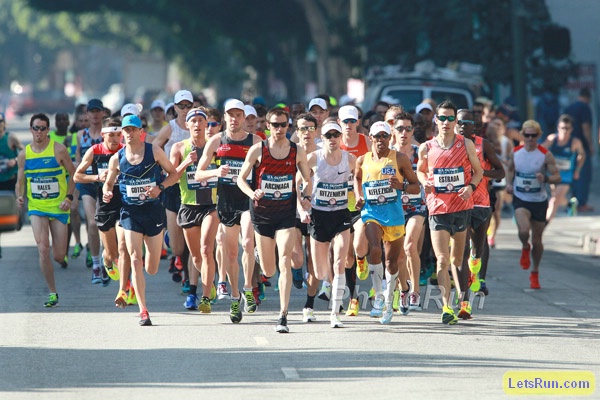 Five USATF-CT Runners started the day and five finished in the heat of the 2016 Olympic Marathon Trails in Los Angeles on Saturday, February 13th. A big congratulations goes out to all finishers, and our biggest applause for those who represented the Connecticut Association.

Chris Zablocki, of Essex, was the first CT runner to finish in an impressive 30th place overall with a time of 2:22:59. Zablocki hung around with the lead pack for the first seven miles but stayed consistent throughout the race for the top CT finish.

Jonas Hampton of New Britain took 48th place in 2:27:41, Hampton also stayed with the leaders for about seven miles before fading. The Hartford Marathon winner in 2015 had the top time of any CT runners heading into the day. Just behind Hampton, John Raneri of New Fairfield took 50th place in 2:27:26, Raneri appeared to take a more conservative approach in the early going and picked off some runners in the later stages.

Christopher Bendtsen of Wolcott was the fourth CT runner to finish in 84th place in 2:34:39 while Everett Hackett of West Hartford was 87th in 2:35:08. There were 105 official finishers of the men’s marathon.