October 12, 2019
The team’s participation in the Hartford Marathon races took on more significance this year as we had a contingent of runners taking on the challenge of the Half Marathon and some for the first time.  Justin Mazza, Ryan Podann and Anthony Shonti were taking the next step in their development as distance runners by running the distance for the first time.  They have been repeat outstanding performers at the 10k distance at the Marine Corp Marathon Unified competition, but this year decided to make the jump (and the commitment to train) for the Half Marathon.  Although their training is a year round endeavor, they had ramped up their miles and intensity in anticipation of the big event.  They were very fortunate to have Bill Morin guiding them each step of the way and making sure they were available for their training runs.  Brian McConnell also played a big part by being their regular running partner always encouraging them and watching their progress.
We have 28 runners participate on Saturday with 22 running the 5k in almost perfect weather for racing (cloudy and cool).  All races started at the same time  so our 5k athletes finished well before the Half Marathoner crossed under the arch and across the finish line.  Our first 5k finisher was Unified Partner Scott Lewis who impressed everyone by not only breaking 21 minutes but taking 2nd place in his age group.  Congrats Scott!  He was followed closely by Paul Kleva who is emerging as one of our best athletes finishing just shy of his PR set in New Haven this year and smashing his time on this course from 2018 by over 3 minutes!  Eight of our athletes had their best time of the season including Scott Lewis, Kyle and Sean Wadlinger, Brandon Licke, Matt Klemets and Lindsey and Lynn Pollack.Mike Strauss set his second consecutive PR by breaking the 29 minute mark for the first time in 28:13.  He improved on his 2018 time by almost 4 minutes.  In total, seven of our harriers improved on their 2018 Hartford efforts.  Kyle Wadlinger’s performance earned him 5th place in his Age Group with Paul Kleva taking 8th place in his Age Group. 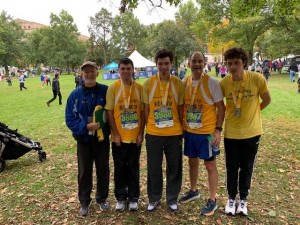